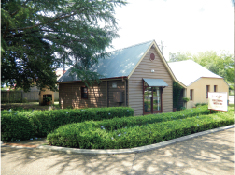 The original fully restored, historic brick and noggin constructed cottage which has stood in this location since 1827. Part of the building is now used as our reception area.

The buildings are in front of the modern New Inn Motel giving a unique perspective of past and present. They capture the imagination of our guests who can appreciate how far our living standards have come and what life must have been like for our pioneers nearly 200 years ago. 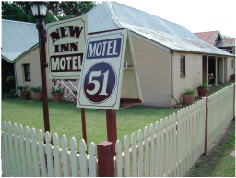 The original Publican’s license for the New Inn was held by Robert Potts between 1837 and 1839. The buildings were in disrepair which the current owners fully restored back to their original condition using traditional building techniques keeping the integrity of the historic Inn.

The idea of building the New Inn Motel first came to Chris’s brother, Bill (deceased) back in 1993. With local and heritage architects and the help of the local council, the dream became a reality. Sadly Bill was not with us for the opening, but Chris and wife Helen completed the New Inn Motel as it stands today, a legacy for the memory of Bill.

We opened seven years later in 2000. Our valued guests have been coming back time after time since then.

Send us a message with your desired room type, arrival date and number of nights you'd like to reserve, and we'll contact you in no time.